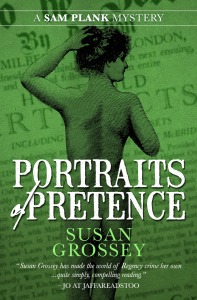 I’m a demanding reader – I want books to entertain, educate and inform (or is that the BBC?) – and so I am an equally demanding author.  As soon as I realised that I wanted to write historical fiction, I knew that I was letting myself in for a huge amount of research.

Sometimes, as I leaf through yet another newspaper from 1824, I think how simple it would be to write something set today, when I just know what people drink and how they drink it and how much it costs.  But a similar scene in an historical novel opens can after can of worms.  Let’s say, for instance, that I want the narrator of my series of historical crime novels, magistrates’ constable Sam Plank, to come home after work and sit down at the kitchen table to have a chat with his wife.  Is such a couple in the 1820s likely to have a kitchen at all, or just a range in the corner of the only room?  (The former.)  Did people sit in the kitchen in those days, or was it purely for cooking?  (Yes, they sat there – but not on funky bar-stools from Ikea.)  Did they drink tea?  (Yes, but it was expensive, and often they were on second or third or even fourth “brewing” from the same leaves.)  Did they have cups, or mugs, or beakers?  (Yes to all three, but of varying quality.)  And I had to check all of that just so that I would feel confident writing “Sam sat heavily on one of the kitchen chairs, and Martha, sensing his mood, wordlessly pushed a cup of tea towards him.”

When I read an historical novel, I need to feel sure that the details I am imbibing along the way are accurate, and so as an author I am scrupulous about authenticity.  If readers are going to trust me to take them back in time, I must get it right for them.  In all four novels so far, my constable – rather like his modern beat counterpart – spends a great deal of time walking around London.  And whenever I send him off on a new journey, I do it myself – to check journey times, and likely views, and any particular sounds or smells that might be significant (church bells, for example, or the scent of the river – which was of course much, much stronger two centuries ago).  My husband calls it “walking the Plank”.  In Sam’s latest outing – “Portraits of Pretence” – he has dealings with a French banker in Craven Street, which still exists, but now it is all but lost down the side of Charing Cross Station (a much later arrival, in the 1860s), and so imagination and old drawings came into play when I had to describe its former significance.  Museums and art galleries are invaluable when it comes to descriptions of clothing and furniture, although I have now become a very critical watcher of costume dramas, tending to sniff dismissively and say “He would never have worn a collar that tall in 1832 – sheer madness”.  Still, obsessive pickiness is no bad thing in the historical author, and perhaps even the best qualification for the job.

Susan Grossey graduated from Cambridge University in 1987 with a degree in English, and then taught secondary English for two years before realising that the National Curriculum was designed primarily to extinguish every spark of creativity in its teachers.  She then became a technical author, and reached the pinnacle of this profession when I was asked to document the workings of a choc-ice wrapping machine in Cardiff, while wearing a fetching blue hairnet (which I forgot to remove until it was pointed out by a cashier in a petrol station on the M4).

Since 1998, she has been self-employed as an anti-money laundering consultant, providing training and strategic advice and writing policies and procedures for clients in many countries.  As part of her job, she has written several non-fiction books with exciting titles like “Money Laundering: A Training Strategy”, “The Money Laundering Officer’s Practical Handbook” and “Anti-Money Laundering: A Guide for the Non-Executive Director”.

To receive details of all our events, please click here.